Last week, I had the special privilege of participating in the first ever Silicon Valley Voice, an American Idol-style singing competition featuring tech boy band Coverflow (comprised of Ethan Beard, Tim Chang, Rajil Kapoor, Philip Kaplan, Prashan Fuloria and Kristian Segerstrale) and held at the world-famous Fillmore, where rock legends like the Grateful Dead, Jimi Hendrix and Pink Floyd have once performed.

Presented by Silicon Valley Bank, proceeds from the event benefited several childrens’ charities including Bay Kids Bay Area, Make A Wish, and Little Kids Rock. The invitation only event was exclusive to members of the tech community, with a guest list that read like a Who’s Who of Silicon Valley, including judges Dave McClure,David Hornick, Steven Jang and Alison Murdock.

Of the 55+ contestants that applied to participate, seven finalists were selected including: 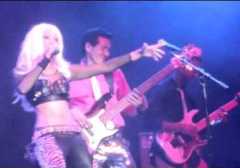 Now, performing on stage isn’t something new to me — in my spare time, I moonlight as lead singer for 80s Pop-Rock cover band, Honey Circuit. Participating in a singing competition, on the other hand, was something I’d only done one other time in my life, over twenty years ago.

In deciding on what song to sing, I opted to rock out and entertain, belting out a rendition of You Shook Me All Night Long by AC/DC. This was, after all, meant to be a fun, light-hearted event.

The Froomz team was out in full force, including Yan Heim (with husband Patrick), Courtney McQuade and Brad Lev, along with about a dozen friends, all of whom waved yellow pom-poms to cheer me on.

By the end of the evening, the organizers had raised over $23,537, with the grand prize winner, Sara Oliver, receiving a check for $3,000 for her favorite charity, Better Lives, which provides medical care in Sierra Leone.

Congratulations to Heidi Bianchi, Event Producer at SVB, for a job well done! For more information about Silicon Valley Voice, visit their website at SVB Voice.